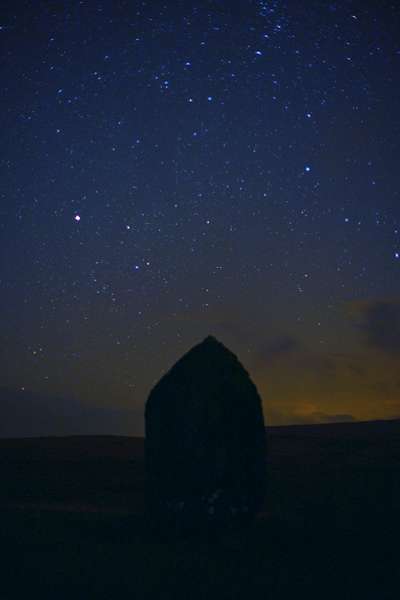 I planed a night time trip out to the Maen Llia standing stone
In order to get images of the Perseids meteor shower
This is an annual event every August, but due to bad weather
Across the Brecons I arrived two nights after the meteor
Shower peek.

Setting out over the boggy tufts of grass, which move with
Every foot step, my torch decided to dissemble itself
Leaving me in total darkness, I could not move for fear of
Hitting the camera (already set up on the tripod) fortunately
For me my Sidekick (Kato) who I had persuaded to
come along was Making his way over the stile into the
field, torch blazing away. It would be several hours
later we found the many Items of torch.

The next few hours we did observe quite a few meteors but
Never within my 50mm lens although! we did miss a meteor
Burn up directly over the standing stone, but, the meteor
was in between the 8 second exposure frames!!!
So after taking over 40 Images we decided to call time on
what was an unsuccessful night, we
Will try again another night or place, maybe the Leonids
Meteor shower.

The Image on the right was one of MANY frames but no Perseid
meteor, this time.

Copyright © John R Arrowsuch. Amethyst Landscape Photography. All images and text within this website are copyright and must not be copied or reproduced without prior written consent.
Next
Previous